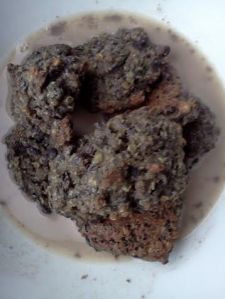 This recipe was originally inspired by Sylvia Fountaine’s post at feasting at home. (http://bit.ly/1lsdpLe) Except the Norwegian spin, which came from one of my two book clubs, the one in which we try to read books from, or at least about, other countries. Whoever is hosting tries to serve food from, or at least influenced by, that place. Our most recent book was “Norwegian by Night,” by Derek Miller. Which was very good. And set in Norway. But with a heavy emphasis on being a Jew from New York forced to live in Norway. So I think it’s okay that I took such enormous liberties with what is apparently a most classic Norwegian dish. Especially since the end result, which was heavily influenced by Signe Johansen’s recipe in Food and Wine (http://bit.ly/1hlg8ks), wound up being completely delicious, as well as entirely gluten and sugar free. Note that the meatballs themselves are vegan. But the gravy is not.  Here’s what I did.

1. Rinse the lentils and place them in a medium pot with 3 cups of water and the cardamon pods. Bring to a boil, reduce the heat to low, cover, and simmer for 25 minutes. Drain well.

2. While the lentils are cooking, rinse the quinoa and place it in a small pot with 1 cup of water. Bring to a boil, reduce the heat, cover, and simmer for 14 minutes. Turn off the heat and remove the lid.

3. Saute the onion in 1 T. olive oil over medium heat for 5-7 minutes. Add the spices and salt, and cook for another minute or two until fragrant.

4. Pre-heat the oven to 400 and line a baking sheet (or two) with parchment paper or a silicone mat. Combine the quinoa, half of the lentils, and the onion mixture in the bowl of a food processor. Pulse several times, until it has the texture of coarse sand. Transfer the mixture to a large bowl. Add the tofu and remaining olive oil to the bowl of the food processor (no need to rinse) and mix until smooth, scraping down the sides as necessary. Mix the tofu mixture into the lentil/quinoa combination, then stir in the remaining lentils until everything is thoroughly combined. Either form the mixture into balls or, if it’s too wet (as mine was), use a tablespoon measure to form ball-like patties on the prepared baking sheet(s). Bake for 20-25 minutes. If you prefer a crisp exterior, flip the balls and bake for another 15-20 minutes.

5. While the balls are baking, make the gravy. Boil the stock in a large, deep skillet for approximately ten minutes, until it’s reduced by half. Then add the wine (or brandy) and boil for another two or three minutes. Whisk in the creme fraiche and cocoa powder, reduce the heat, and simmer until the balls are done. Serve on the side.